India, which controls the region - a slice of land including Limpiyadhura, Lipulekh and Kalapani areas in the northwest - has rejected the map, saying it is not based on historical facts or evidence.

India has termed as untenable the "artificial enlargement" of territorial claims by Nepal after its lower house of parliament on Saturday unanimously approved the new political map of the country featuring areas which India maintains belong to it.

The National Assembly, or the upper house of the Nepalese parliament, unanimously passed the constitution amendment bill providing for inclusion of the country's new political map in its national emblem.

The bill was passed with all the 57 members present voting in its favour.

The latest border dispute between the countries began last month after India inaugurated Himalayan link road built in a disputed region that lies at a strategic three-way junction with Tibet and China.

The 80km (50-mile) road, inaugurated by Indian Defence Minister Rajnath Singh, cuts through the Lipulekh Himalayan pass, considered one of the shortest and most feasible trade routes between India and China.

The road cuts the travel time and distance from India to Tibet's Mansarovar lake, considered holy by the Hindus.

But Nepal says about 19km of the road passes through its area and fiercely contested the inauguration of the road, viewing the alleged incursion as a stark example of bullying by its much larger neighbour.

Nepal, which was never under colonial rule, has long claimed the areas of Limpiyadhura, Kalapani and Lipulekh under the 1816 Sugauli treaty with the British East India Company, although these areas have remained under the control of Indian troops since India fought a war with China in 1962.

this is how an hindu nation is build ? Bjps cant rule india for more than 10 year...

New Delhi, Jul 26: India reported a spike of 48,661 coronavirus cases in the last 24 hours, said the Union Ministry of Health and Family Welfare on Sunday.

Maharashtra has reported 3,66,368 coronavirus cases, the highest among states and Union Territories in the country.

A total of 2,06,737 cases have been reported from Tamil Nadu till now, while Delhi has recorded a total of 1,29,531 coronavirus cases.

According to the Indian Council of Medical Research (ICMR), 4,42,263 samples were tested for coronavirus on Saturday and overall 1,62,91,331 samples have been tested so far.

US orders China to close its consulate in Houston; China warns of firm countermeasures

Houston, Jul 22: China said on Wednesday that the US has ordered it to close its consulate in Houston in what an official called an outrageous and unjustified move that will sabotage China-US relations.

Foreign ministry spokesperson Wang Wenbin condemned the action, which comes as tensions rise between the world's two largest economies. He warned of firm countermeasures if the US does not reverse its decision.

The unilateral closure of China's consulate general in Houston within a short period of time is an unprecedented escalation of its recent actions against China, Wang said at a daily news briefing.

There was no immediate confirmation or explanation from the U.S. side.

Media reports in Houston said that authorities had responded to reports of a fire at the consulate. Witnesses said that people were burning paper in what appeared to be trash cans, the Houston Chronicle reported, citing police. 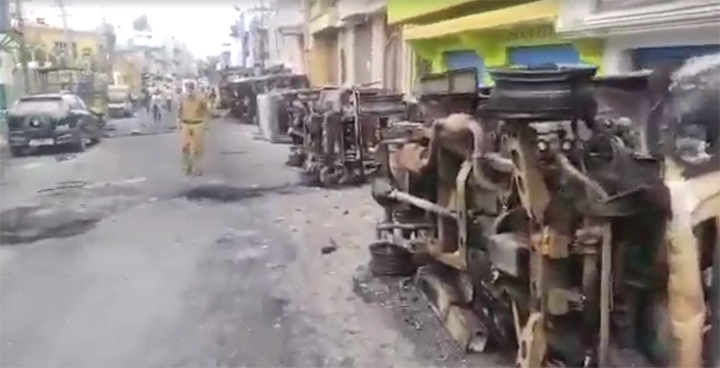 Bengaluru, Aug 12: Areas under Pulakeshinagar assembly constituency in Bengaluru resembled a war zone on Wednesday, hours after an unruly mob went on a rampage torching vehicles, irked over a 'communally sensitive' social media post allegedly put up by a relative of a Congress MLA.

Charred vehicles, shards of glass from broken windows, stones and bricks lie strewn over the deserted roads of the violence-affected localities.

Earlier, three people were killed in police firing and scores of others wounded, including at least 50 policemen in the violence and arson that erupted in the city on Tuesday night and continued till the wee hours of Wednesday.

Property of Congress legislator Akhanda Srinivasa Murthy and his family members were targeted after a 'communally sensitive' social media post uploaded online by one of his relatives enraged a section of people.

"We were not at home when all this happened," Jayanthi, the MLA's sister said weeping inconsolably.

"The only solace is that my brother and his family are safe," she said.

The violent crowd set on fire police vehicles and barged into DJ Halli police station on the intervening night of Tuesday and Wednesday and damaged the property. Police have arrested about 110 people on charges of rioting. 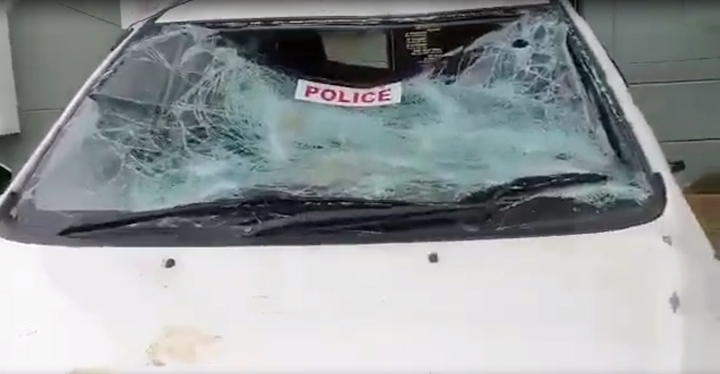 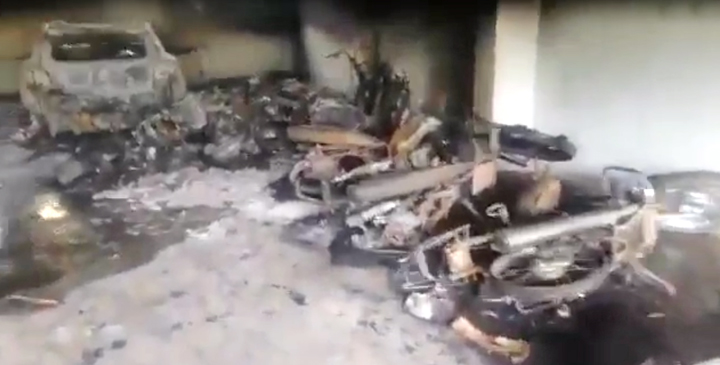 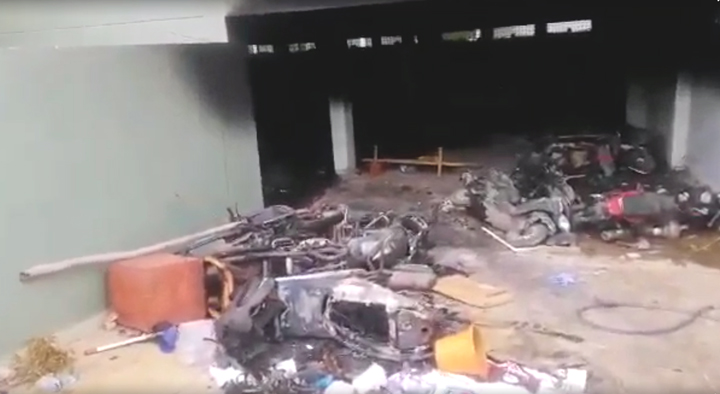 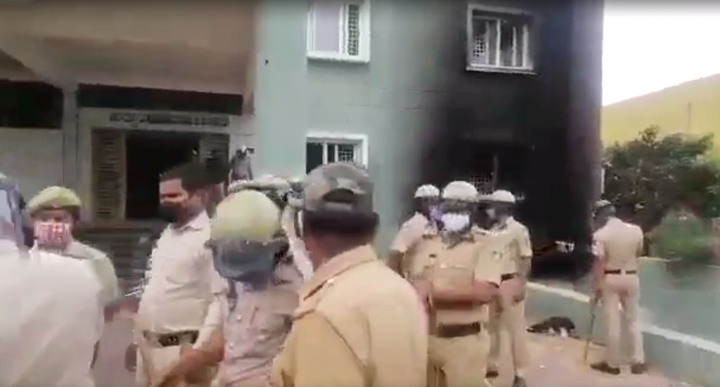 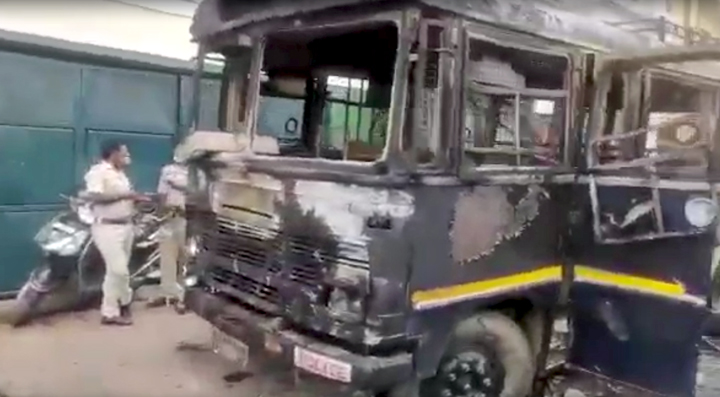 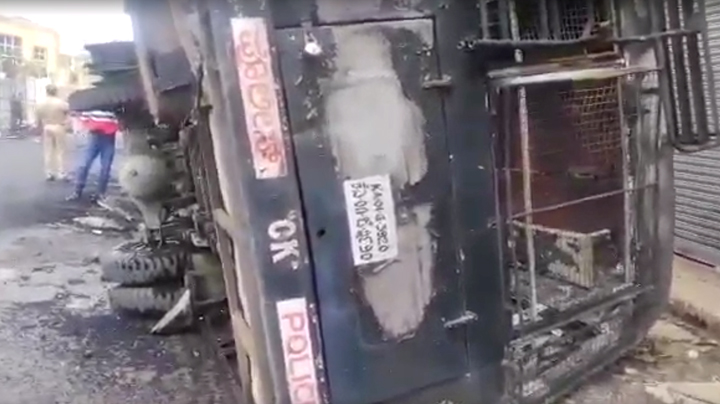 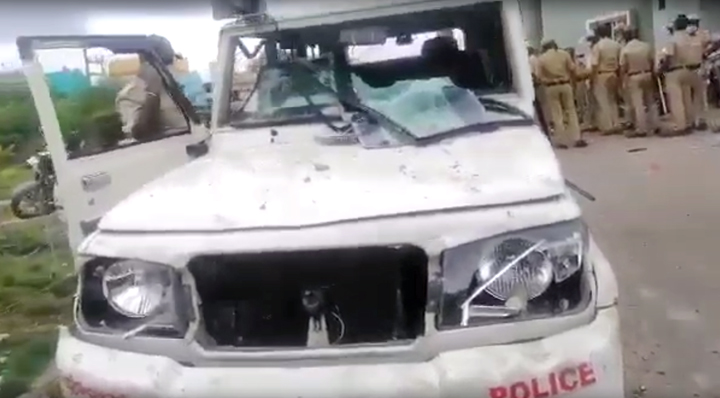 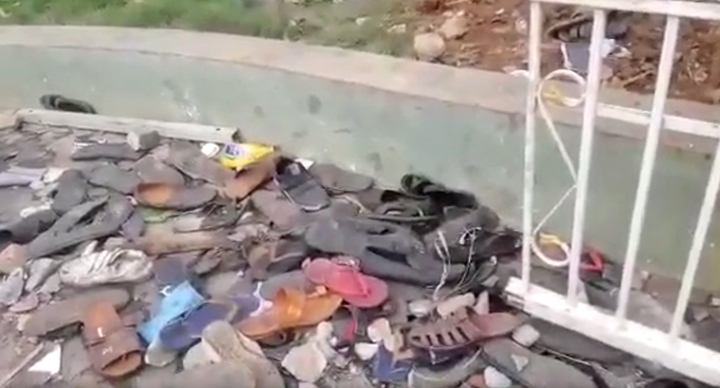