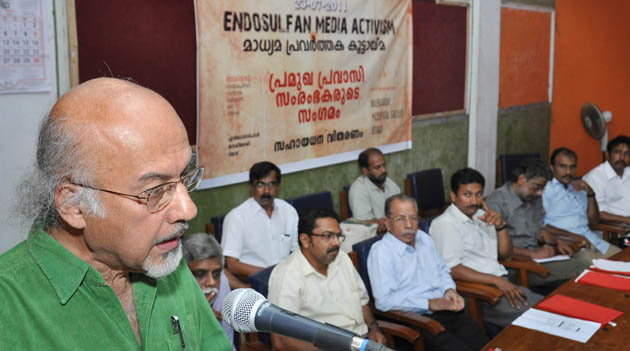 Kasaragod, July 23: Veteran journalist Padmabhushan T J S George called upon the mass media to continue their fight against endosulfan with the intention of imposing ban on it in the state.

He was speaking to media persons after inaugurating a 'Journalist meet' organised to provide financial help to the victims of Endosulfan at Envisage Municipal Conference Hall, here on Saturday.

Mr George said it is the responsibility of media persons to raise voice against the companies which produces fertilizers like endosulfan which is injurious to the health.

The international ban imposed on endosulfan at the Stockholm convention of the Persistent Organic Pollutants, POPs convention was a happy news for hundreds of families of the endosulfan victims in the district, but even though it is banned it is still used in boarder areas, he lamented.

He also exhorted the people in general to work for the rehabilitation of the endosulfan victims.