Bengaluru, Jan 20: A large number of Congress workers and farmers on Wednesday descended on the city to protest the contentious farm laws of the Centre and condemn the hike in fuel prices.

Commuters faced a harrowing time due to traffic snarls caused by agitations at various places. Elaborate security arrangements were made in view of the anti-farmers law protests called by the Congress and roads barricaded.

Following a call given by Congress state chief D K Shivakumar to lay siege to the Raj Bhavan here, party workers arrived from various parts of the state.

They have planned to stage protests and later submit a memorandum to Governor Vajubhai Vala. Before heading to the protest venue at freedom park, Congress state chief D K Shivakumar accused the state government of stopping the protesters from reaching the state capital.

"I have been receiving calls saying the police have been stopping farmers and Congress workers since last night," Shivakumar alleged in a video message. He appealed to those who were prevented from proceeeding to the city, to hold protest by blocking the highways.

"Reach the Bengaluru Railway station and we all shall lay siege to the Raj Bhavan," he added.

Meanwhile, the BJP ridiculed the protests and alleged that the Congress, which had been responsible for the farmers' suicide throughout its regime, was staging a drama by opposing the pro-farmer laws introduced by the Centre.

"Farmer suicides would not have escalated if you had been pro-farmer, isn't it?" the saffron party asked in a tweet.

Bengaluru, Mar 7: The Karnataka High Court has quashed a private complaint and cognisance of offences taken by a trial court in 2013 against the Airports Authority of India (AAI), the Air India Ltd. (AI) and its executives on the Air India Express 812 plane crash incident outside Mangaluru airport on May 22, 2010, in which 158 persons on board were killed.

The judicial magistrate first class, on February 19, 2013, had taken cognisance for offences like culpable homicide not amounting to murder, causing death by negligence under Indian Penal Code against AAI, AI and their executives based on the private complaint lodged on March 6, 2012, by Mangaluru-based 812 Foundation.

Justice Ashok G. Nijagannavar passed the order while allowing the petitions filed in 2013 by AAI and its executive Ansbert D’Souza, and AI and its executive Peter Abraham, who had questioned the legality cognisance taken by the magistrate court merely on the basis of “deemed sanction” for their prosecution.

The High Court has held that trial court had failed to consider that the charge sheet, filed by the jurisdictional police on the air crash incident, was closed by the trial court on February 13, 2012, as the two pilots of the aircraft, who were the only two named as accused, had also died in the crash.

Besides, the magistrate did not consider the report of the Court of Inquiry, conducted as per the law into the air crash, which had specifically pointed out that the crash occurred due to failure of the pilot, the High Court said, while pointing out the trial court, before taking cognisance of offence against the petitioners, had also failed to take into consider that petitioners were not named either in the charge sheet or in the report of the Court of Inquiry.

The High Court said the magistrate was not correct in holding that there exist “deemed sanction” for their prosecution as authorities did not decide complainant’s plea for grant of sanction within a specific period. The High Court said there is no concept of “deemed sanction” in law as the period of three to four months suggested by the apex court under Prevention of Corruption and such a suggestion has not been translated into a law by the Central government.

Bengaluru, Feb 27: Prime Minister Narendra Modi has stressed on e-marketing of world-famous Channapatna toys and said a meeting of start-ups of Bengaluru will be convened to explore the possibilities of taking Karnataka’s traditional toys to the corners of World.

Interacting with a group of toy makers of Channapatna in Ramanagara district during the virtual inauguration of ‘India Toy Fair’ in New Delhi this morning, the PM went down the memory lane, remembering his childhood days, after he heard names of a few toys. “By mentioning the names of toys, you are making me to go back to my days as a child playing with certain toys,” he said.

The toy makers told the PM that Channapatna, is popularly known as ‘Gombegala Nagara’ (City of Toys), for manufacturing varieties of toys, which is most sought after worldwide.

These toys have a history of over two centuries and as many as 2,000 artisans are involved in it. While 80 percent of workforce is men, 20 percent are women. The toys are made out of the locally available ‘Hale Mara’ (Soft ivory wood), cut and seasoned before coating with lacquer which is made from vegetable dyes. They will manufacture toys, abacus, dice, spinning tops and other small toys.

Mr Modi sought to know how big the toy cluster in Channapatna was and how many people were working in it. He was explained that over 2,000 artisans were involved and there were two training Centres. The PM was also told that they required the Government’s support for opening new centres as more people were getting into this business.

The toy makers replied in negative when Mr Modi asked whether they know about Bengaluru being called as start-ups capital and IT/BT hub of India with the pool of talents. The PM advised them to bring those professionals to Channapatna Training Centres to seek their help on latest innovation so as to make the Channapatna toys reach length and breadth of the world. 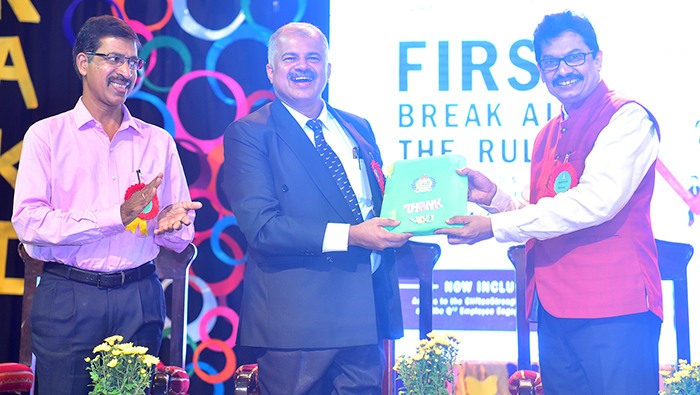 Mangaluru, Mar 5: Every incident of joblessness can in some way be attributed to the lack of career guidance or misalignment of education and career goals, said KPSC Member Dr. Ronald Anil Fernandes.

Addressing the gatherings after inaugurating the 'MERAKI', the career day organised by the University Employment Information and Guidance Bureau (UEIGB) at Mangala auditorium of Mangalore University on Friday, he expressed concern over unemployment and said, 'In Uttar Pradesh, according to a media report, 3700 PhD holders, 28,000 PG holders and 50,000 graduates applied for 62 peon posts, which is appalling. The health of the economy is really alarming'.

He further stated that 36 crore youth, 27.5 % population of the country belong to the age group of 15 and 29. In Karnataka 1.7 crore youth fall in this age group. Post pandemic getting a job is a difficult task. While many have been doing part-time job and others forced to take up jobs unrelated to what they studied at college.

Meanwhile, he added that there are many examples like Bill Gates (Microsoft), Steve Jobs (Apple), Mark Zuckerberg (Face Book), Elon Muck (Tesla) and many others, who proved that graduation is not important to become a successful entrepreneurs.  Exposure to vocational education in all schools and colleges, which may be with industry training may help.

Explaining the importance of competitive exams, he said that out of 2,123 candidates who appeared for the interview in 2020, only 7 were from coastal region. Never give up approach, good coaching centres and readiness to work anywhere is very important to overcome this problem.

Presiding over the function, Mangalore University Vice Chancellor Prof. P Subrahmanya Yadapadithaya said that we should deserve first then should desire. “Failure is not the end and it increases our capacity.  Willingness to perform, utilizing ample opportunities and developing competence, being a smart performer is the key,” he added.

Registrar (Administration) K Raju Mogaveera (KAS) opined that the university campus should prepare students for their life. Also hoped developing a sophisticated competitive exam training centre at the university.  UEIGB Chief Dr. Preethi Keerthi D'Souza explained the activities of the bureau and urged students to utilise the opportunity under UEIGB.