Hassan, Oct 9: Three youths were feared drowned in Hemavati river at Hunusavali Village in Alluru taluk of this district on Tuesday.

According to police, three of them identified as Rathan (22), Bhimraj (27) and Manu (27) jumped into the river Hemavati, one by one, to take a holy dip in the water.

Eyewitness said that they were washed away due to heavy current in the river. 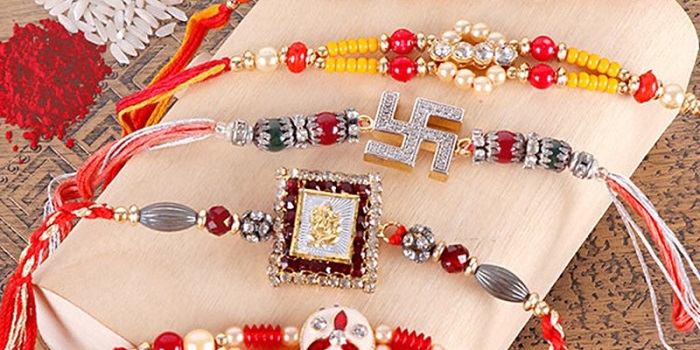 Mangaluru, Jul 29: Ahead of popular Hindu festival Raksha Bandhan, Karnataka postal circle has introduced an online portal 'Rakhi Post' to deliver rakhis across the country amid the COVID-19 outbreak.

This year Raksha Bandhan will be celebrated on Monday, August 3.

This service can be used to send rakhis to people across the country without violating the coronavirus norms.

Speaking to news agency, Senior Superintendent of Post offices, Shriharsha N said, "I am happy to announce that Karnataka postal circle has introduced an online portal 'rakhi post' to deliver rakhis to people during coronavirus phase."

"People willing to avail this service can visit this portal and pay a nominal amount of Rs 100 to send a rakhi," Shriharsha said.

The official has suggested to avail the service before July 31 for the timely delivery of rakhis.

The portal is also offering a special service to send rakhis to the soldier deployed on the borders. "We have also introduced a unique feature to deliver rakhis to Indian soldiers on the borders," he added.

Bengaluru/ Mangaluru, Aug 3: For the first time in many days, if not weeks, the number of recoveries in Karnataka was higher than new covid-19 cases in the state raising hope of some relief against the virus.

Karnataka confirmed 4752 new covid- 19 cases while the number of recoveries stood at 4776 in the 24 hours until 5 pm on Monday. The state also recorded 98 deaths.

Medical education minister K.Sudhakar said that the recovery rate in Karnataka is at around 42%

The total number of cases in Bengaluru crossed the 60,000 mark including 1497 cases on Monday.

The total number of cases in Mysuru breached 5000 cases as 372 persons tested positive. The mineral-rich district of Ballari recorded 305 cases. Other parts of Karnataka has seen a surge in cases with 15 out of the 30 districts reporting at least a 100 cases.

Dakshina Kannada district alone has recorded 153 new cases and seven deaths.
Among the 153 new cases, 119 are from Mangaluru, 11 from Bantwal, six from Beltangady, four from Puttur, one from Sullia, and 12 from other districts.

The total number of covid positive cases in the district mounted to 6,168. Out of these, 3,138 cases are currently active. As many as 2,854 persons have recovered and been discharged, and 176 deaths have occurred so far.

Udupi reported 126 fresh cases past 24 hours, according to health bulletin released by the Udupi district administration. They include 58 from Udupi, 34 from Kundapur, 28 from Karkala, and six from other districts.

A total of 34,500 samples have been collected so far. 29,174 have turned out to be negative. As many as 4,800 confirmed cases of coronavirus have been reported so far in the district.

As many as 2,812 patients have been discharged so far, and 1,952 cases are currently active. As per district bulletin, 36 deaths have occurred so far. One positive case has been transferred to Dakshina Kannada.

Biggest single-day spike of over 5,000 Covid-19 cases in Karnataka

Bengaluru, Jul 23: Karnataka on Thursday recorded a biggest single-day surge of over 5,000 cases and 97 related fatalities, taking the total number of people who tested positive for the virus to 80,863, the health department said.

The day also saw a record 2,071 patients getting discharged after recovery.

Out of 5,030 fresh cases reported, a whopping 2,207 cases were from Bengaluru urban alone.

As of July 23 evening, cumulatively 80,863 Covid-19 positive cases have been confirmed in the state, which includes 1,616 deaths and 29,310 discharges, the health department said in its bulletin.

It said, out of 49,931 active cases, 49,291 patients are in isolation at designated hospitals and are stable, while 640 are in ICU. Out of the 97 deaths reported on Thursday 48 are from Bengaluru urban, followed by Mysuru 8, Dakshina Kannada 7 and others.

Most of the dead are either with a history of Severe Acute Respiratory Infection (SARI) or Influenza-like illness (ILI).

Among the districts where the new cases were reported, Bengaluru urban accounts for 2,207, followed by Raichur 258, Kalaburagi 229, Dakshina Kannada 218, and others.

Bengaluru urban district tops the list of positive cases, with a total of 39,200 infections, followed by Dakshina Kannada 4,209 and Kalaburagi 3,370.