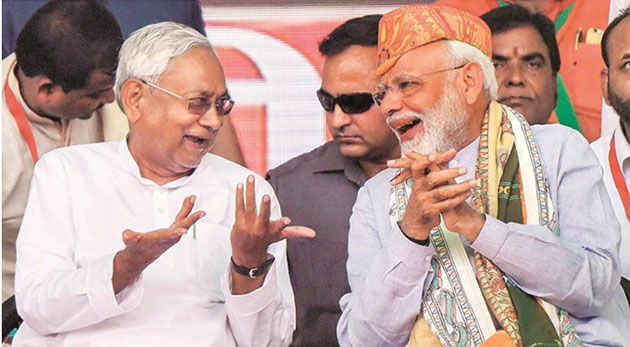 Patna, Aug 10: After taking oath as Bihar Chief Minister an eighth time, thus continuing in the chair with a change of partners, Nitish Kumar took a shot at Prime Minister Narendra Modi over the next Lok Sabha elections: "He won in 2014, but will he in 2024?"

Though Nitish Kumar repeatedly spoke of "working towards Opposition unity" to unseat the BJP at the Centre, he told reporters that he is "not a contender for anything", when asked if he wants to be PM candidate. "The question to ask is, if the person who came in 2014 will win in 2024,” he said.

Elections in Bihar are due in 2025, a year after the Lok Sabha contest. Nitish is likely to still be in the chair in 2024, which means the who'll-be-the-challenger speculation isn't likely to die down soon, especially with the Congress weakened and the Opposition still far from united. His deputy once again, RJD's Tejashwi Yadav has said Nitish Kumar is the "most experienced chief minister in India right now".

It helps Nitish Kumar's case that another regional leader with national ambitions -- Bengal's Mamata Banerjee — has had to halt her march after corruption charges against her party colleagues.

Analysts have for years floated the theory that Nitish Kumar could be the Opposition candidate against PM Modi, if the Congress plays a non-leading role. But that's drowned out as he floats in and out of alliances — with and against the BJP. Till yesterday, he was chief minister with BJP support. And now he is back with the RJD of old pal Lalu Yadav, whose son is his deputy in the new government — a new version of their 2015 alliance. The Congress is among the partners.

The first version of the JDU-RJD-Congress tie-up — called the 'Mahagathbandhan' or Grand Alliance — won power in 2015. Nitish Kumar had broken up with the BJP two years before that, ending a two-decade relationship. He had problems with Narendra Modi's past, particularly the 2002 Gujarat riots, and left the NDA after he became the PM face.

But he made up with PM Modi's party in 2017, walked out the Mahagathbandhan and took a fresh oath. The JDU and BJP remained together for the 2019 Lok Sabha contest, and then won the 2020 assembly polls. Nitish Kumar remained in the chair. Two years on, he has switched again.

Today he said he did not want to be Chief Minister after the 2020 win with the BJP. "Ask people in the party (JDU), what they have been reduced too. I did not want to become CM... but I was put under pressure. Then you see what happened. I have not even spoken to you (journalists) in two months."

He pointed towards the drop in JDU's numbers. "How many seats did we win in 2015? And then we went with the same people (BJP) and look at what we have been reduced to." Besides those in the JDU, Tejashwi Yadav too has said the BJP "wants to finish off regional parties" and "usurps its partners".

In 2015, Nitish Kumar's JDU had won 71 seats as part of the Grand Alliance's 170, in a House of 243. The RJD was the single largest party with 80 seats, but he became chief minister as leader of the pact.

At present, the JDU has 45 seats. The BJP, which has 77, made him chief minister in 2020 despite these numbers — but with two deputies from its stable. Why the switch now? Nitish Kumar and his party, it is learnt, were spooked in the latest by the Maharashtra coup in which the BJP backed a split in the Shiv Sena to return to power.

On his fate after yet another flip, Nitish Kumar today said, "Whether I will stay or not... let people say what they have to say." After staking claim yesterday, he said he "never allowed corruption", and "we want brotherhood in society". Standing next to him, Tejashwi Yadav accused the BJP of dividing people along communal lines: "We are socialists. All of us want that the BJP's agenda shouldn't be implemented in Bihar."