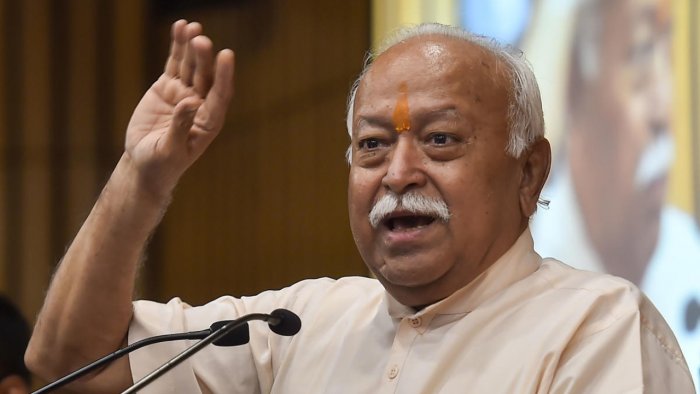 Nagpur, Oct 5: RSS chief Mohan Bhagwat on Wednesday said that population control and religion-based population balance is an important subject that can no longer be ignored while framing policy.

Dwelling on the population explosion, he said that in 2000, the Government of India after multi-stakeholder consultations had framed a population policy.

"One key goal was to obtain a Total Fertility Rate (TFR) of 2.1. Recently, in 2022, the NFHS report, which comes out every five years, has been published. Due to social awareness and constructive co-operative efforts by the central and state governments the TFR has come down below the targeted 2.1 to 2.0. While we are continuously progressing on the front of public awareness and the goals of population control, two more questions are emerging for consideration," Dr Bhagwat said addressing the annual 'Vijaya Dashami' rally in Nagpur.

According to him, social scientists and mental health experts opine that ultra-nuclear families are posing challenges for the all-around development of young girls and boys, families are feeling a sense of insecurity, social tensions, loneliness etc are presenting testing times and a question mark hangs over the central edifice of our society – the 'family system'.

"In the 21st century, the three new countries that have come into existence, East Timor, South Sudan and Kosovo, have been the result of population imbalance in certain territories of Indonesia, Sudan and Serbia. Population imbalances lead to changes in geographical boundaries," he said.

It may, however, be mentioned, that in May, when the BJP-led NDA government released the findings of the National Family Health Survey (NFHS 5), the data showed that the fertility rate of Muslims registered the sharpest ever decline over the past 20 years as compared to that of other religious groups, including Hindus.The fertility rate among Muslims dropped to 2.3 in 2019-20 from a high of 4.4 in 1992-93.

"Alongside the differences in birth rate, conversions by force, lure or greed and infiltration are also big reasons. All these factors have to be mulled over. Population control and religion-based population balance is an important subject that can no longer be ignored," Bhagwat said.