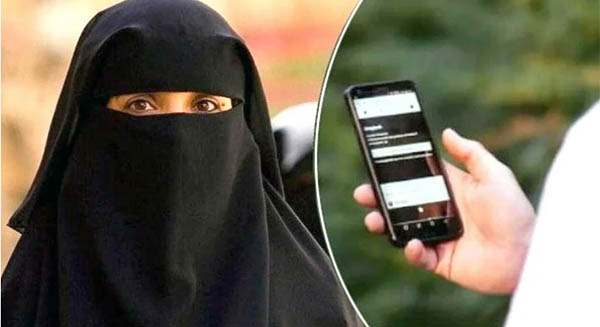 Request for a Suo motu petition in regard to the unconstitutional, illegal and misogynistic targeting of Muslim women through the SulliDeals and BulliBai Apps.

On the 1st of January, 2022, as the world was sending out celebratory messages to mark the New Year, hundreds of Muslim women woke up to deeply objectionable, obnoxious and misogynistic attack on them via the ‘Bulli Bai App’. Photos of hundreds of Muslim women, including prominent journalists, activists and thinkers, were secured and uploaded without their permission on this app and were subsequently ‘auctioned’.

The Bulli App was hosted at the URL bullibai.github.io. GitHub is platform which hosts websites, with a repository of open-source codes. After much furore, the platform was finally taken down on the morning of 01.01.2022 and the Twitter handle of the Bulli Bai has been suspended. Like ‘Sulli Deals’ the ‘Bulli Bai’ app was also created and used on GitHub. The GitHub platform allows users to create and share apps. While the portal is no longer functional, the offenders continue to walk around scot-free leaving the survivors struggling with their personal identities revealed to millions of social media users who want to buy and sell their bodies. This has rendered them vulnerable in both social media spaces and real world.

This is not the first when such an outrageous public sale of Muslim women’s bodies has taken place openly. In the month of July 2021, a similar App called Sulli Deals app offered photographs of Muslim women as ‘deals.’ for virtual auctions. The perpetrators even had no fear of legal consequences as they publicy declared their intention to launch an application that facilitates the sale of Muslim women. While the very action of downloading and posting pictures and private details of Muslim women, in both instances, was not only non-consensual and in violation of the right to privacy, it was clearly meant to degrade, dehumanize, vilify and demean Muslim women. ‘Auctioning’ women in this manner is a depraved attempt to commodify them and strip them of any personhood or dignity. This is a blatant violation of the very fundamental right to live with dignity and the right to bodily autonomy protected under Article 21 of our Constitution.

However, it is imperative for us to also recognise these repeated attacks on the dignity of Muslim women as a well thought out political strategy by majoritarian forces to systematically isolate Muslims for public harassment and humiliation, and intimidate them into silence. Terms such as ‘Sulli’ and ‘Bulli’ are offensive and derogatory slurs used to specifically insult and denigrate women belonging to the Muslim community and thereby, constitutes hate speech. The public auction of Muslim women is an extreme form of vilification of Muslims reducing them to non-citizens and sub-humans. This only points to the utter moral bankruptcy in our society where communal elements openly target, bully and perpetuate sexual violence against women with alarming impunity. Read along with the public calls for genocide on the streets of Delhi earlier last year, and at the Dharam Sansad in Haridwar more recently, it is evident that instances such as these are carefully strategized hate crimes pushing our country into a dark abyss to which there can be no turning a blind eye to anymore.

Apps such as ‘Sulli deals’ and ‘Bulli Bai’, similarly, perpetuate violence against Muslim women. These apps use pictures and social media accounts of women based on ‘visible indicators’ that establish that they are Muslim, such as their names, usernames, posts, and so on. This is a direct manifestation of the prevalent objectification of Muslim women. These actions, in addition to leading to a severe assault on the dignity of Muslim women, has affected their public participation as well. Many Muslim women were forced to undertake actions such as deleting their pictures and many had to even delete their social media profiles. This has severely limited the participation of Muslim women in online public spaces. State inaction which has allowed this, constitutes a violation of the preambular promise to Equality of Opportunity. Muslims are systematically being denied the opportunity to participate wholly and freely in public life.

Following the attacks against Muslim women on the Sulli Deals App in July, 2021, two FIRs were filed by the Delhi and Uttar Pradesh Police. Both the Delhi Commission for Women (DCW) and the National Commission for Women (NCW) took cognizance of the matter and assured action. Worryingly, nearly six months after the incident was first reported, investigations have made little progress and investigative agencies have not even able to identify the perpetrators of the crime.(1) The callous attitude of the state machinery in addressing the issue has made a complete mockery of the suffering and trauma of the targeted women. As an extension, the deafening silence of the law enforcement agencies in countering repeated communal onslaughts on Muslim women cannot but be seen as an implicit endorsement of such depravity.

The Constitution of India promises every citizen equality and a life of dignity. Nonetheless, routine communal and misogynistic aggressions such as these deprive Muslim women of the most fundamental rights. They compel marginalised women to live in fear and terror in their own country. No civilised society should meekly allow for the targeted harassment, objectification and public auctioning of its women. Given the colossal failure of the state machinery in adequately responding to such instances of hate crimes in the country, the onus now falls upon the Supreme Court to urgently intervene to safeguard the constitutional rights of minority communities and restore public faith in constitutional systems.

Such despicable assaults on the dignity of Muslim women are also calculated attacks on the very idea of India as envisaged by the Indian Constitution. They are carried out with the specific intent of ‘othering’ all marginalised communities and breaking our cherished secular fabric. These actions, solely based on religious hatred, militate against the Constitutional notions of fraternity and violate the right to equality, the right against discrimination, the right to personal liberty, right to religious freedom and the right to life. While our constitution strives for a safe environment for people irrespective of their gender and religion, such acts of violence continue to promote discrimination and public disharmony.

We, therefore, demand that the Supreme Court register a Suo motu petition and ensure that:

(i) The police register FIRs Suo moto and on the basis of complaints, investigate the offence expeditiously and take necessary steps against the perpetrators.

(ii) Monitor the investigation and prosecution in regard to these offences. (edited on 4th Jan)

(iii) Investigation and prosecution in regard to the FIRs registered in July, 2021 also be monitored by the Supreme Court and necessary action be taken if it is found that the police have failed to discharge their duties.

(iv) Direct the concerned authorities to ensure that the GitHub and Twitter platforms are not used for such blatantly illegal activities as Sulli deals and Bulli Bai apps.

(v) Direct payment of suitable compensation to the victims of these communal hate crimes.

(vi) Direct that appropriate steps be taken to ensure the prevention of recurrence of any such communal hate crime.

Goa-bound flight from Russia diverted to Uzbekistan after bomb threat 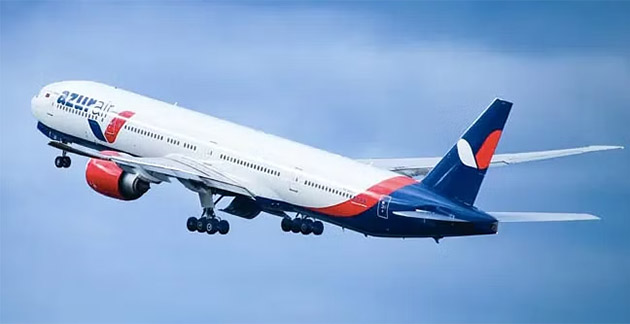 Panaji, Jan 21: A Goa-bound chartered flight from Russian capital Moscow with 240 passengers on board was diverted to Uzbekistan in the wee hours of Saturday following a bomb threat, police said.

This is the second such incident on the Moscow-Goa route involving the same airline in less than two weeks. The flight, operated by Russian airline Azur Air, was scheduled to land at the Dabolim airport in South Goa at 4.15 am, a senior police official said.

"The flight (AZV2463) was diverted to Uzbekistan after an email was received at 12.30 am by the office of the Dabolim airport director, which said that a bomb was planted on the plane.

The flight was diverted before it entered the Indian airspace. It landed at an airport in Uzbekistan around 4.30 am," he said. Apart from passengers, there were seven crew members on board, he said.

On January 9, a Moscow-to-Goa flight had made an emergency landing at Gujarat's Jamnagar airport following a bomb threat.

That flight was also operated by Azur Air. After the threat mail, the Dabolim airport was put on alert and the personnel of Goa Police, Quick Response Team (QRT), Anti-Terrorism Squad (ATS) and dog squad were deployed at the facility as a precautionary measure, Deputy Superintendent of Police (Vasco) Salim Shaikh said.

"Additional police force was mobilised at the airport," he said. 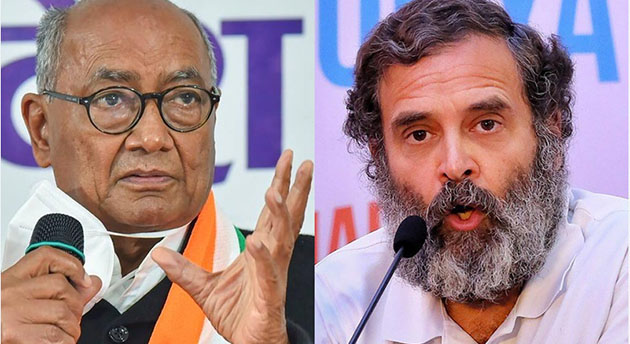 "The views of the party are generated from a conversation. Digvijaya Singh's views are outlying views. They are not views held by the party. We are absolutely crystal clear - the armed forces do a job, and they do the job exceptionally well. They don't need to be providing proof," the Congress leader said.

"They talk about surgical strikes - that we killed these many people. But there is no proof. They are ruling by peddling a bundle of lies," Mr Singh had said.

Mr Singh also said: "I have the greatest regard for the defence forces".

But the BJP seized on the comments and slammed him and the Congress as "anti-national" for questioning the army. The party also demanded Rahul Gandhi's apology.

"Congress leaders are doing Bharat Todo (divide India) on the instructions of Rahul Gandhi. Digvijaya Singh has become a symbol of venomous remarks. Trust in the Army is unbreakable and above politics. If the Army said there was a surgical strike, how can you ask for proof repeatedly. This shows that you do not have faith in our Army," said BJP spokesperson Gaurav Bhatia.

"It has become a character of Congress to give irresponsible statements. But if they speak against the Indian Army, it won't be tolerated. It seems that Rahul Gandhi and Digvijaya Singh have been blinded by their hatred towards Narendra Modi," said the BJP leader.

India launched surgical strikes in 2016 days after 18 soldiers were killed in a terror attack on an army base in Uri in Jammu and Kashmir.

The February 2019 Pulwama attack on a security convoy was blamed on Pakistan-based terror group Jaish-e-Mohammad.

Days after the attack, India retaliated with air strikes in Pakistan's Balakot, which was followed by an aerial dogfight between the neighbours.