Bengaluru, Aug 4: The heath condition of Karnataka Chief Minister B S Yediyurappa who had tested positive for Covid-19 continues to be stable and he is currently asymptomatic, hospital source said.

Congress leader and former chief minister Siddaramaiah who too has tested positive for Covid-19, is suffering from high fever and is currently receiving treatment. He has been admitted at the Manipal hospital in Bengaluru.

"I request all those who had come in contact with me to check out for symptoms and to quarantine themselves," Siddaramaiah had said in a tweet.

Yediyurappa, is in the same hospital for treatment along with his daughter B Y Padmavati, who too tested positive for the virus on Monday.

Yediyurappa on Sunday night (2 August) had tweeted that, "I have tested positive for coronavirus. Whilst I am fine, I am being hospitalised as a precaution on the recommendation of doctors. I request those who have come in contact with me recently to be observant and exercise self quarantine.” 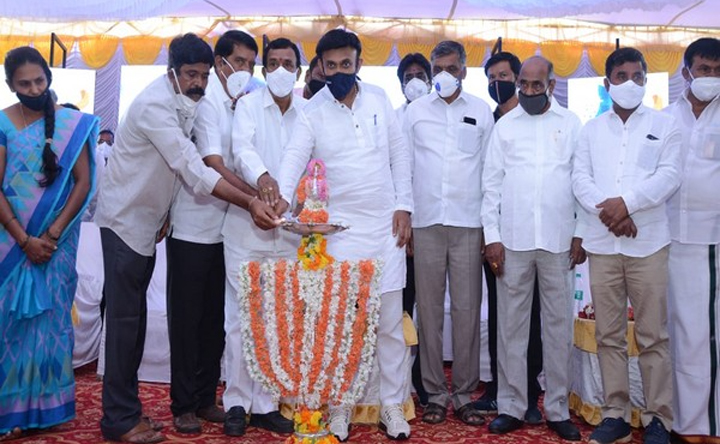 Chikkaballapur, Sept 12: Medical Education Minister Dr K Sudhakar has warned Kolar-Chikkaballapur DCC Bank of action if it does not drop a particular regulation pertaining to loans.

Sudhakar was speaking after distributing cheques for loans to 119 self-help groups under Harobande, Tippenahalli, Poshettihalli, Gollahalli, Chikkaballapura and other gram panchayats of Chikkaballapura constituency, on Friday.

According to a press note, he said several complaints are being heard against the DCC Bank's regulation. Questioning how the beneficiaries could avail the benefit of a loan when a 20% share is secured from them, he urged that the regulation must be discontinued. He warned them to follow the government's regulation or face strict actions.

Dr Sudhakar said the Bank should provide service that is just and pro-people.

Udupi, Sep 26: A 25-year-old married woman has allegedly ended her life by hanging herself in her parental home at Nandalike in Karkala taluk of Udupi district.

The deceased has been identified as Akshata, daughter of Narayana Devadiga and Sharada couple. She resorted to the extreme step between 9 am and 11.30 am on Sept 25 when no one else was there at home.

In her compliant, the mother of the deceased has stated that even though Akshata got married to Surendra from Talalpadyi nearly two and a half years ago, she continued to live with her parents at Nandalike.

A case under section 174 of the Criminal Procedure Code stands registered at Karkala rural police station.

Bengaluru, Sept 23: The Karnataka assembly on Tuesday passed a bill to reduce salaries and allowances of members of the state legislature by 30 per cent for a year to augment financial resources required to fight the Covid-19 pandemic.

The state expects to save somewhere between Rs 16 crore to Rs 18 crore by this exercise, Law and Parliamentary Affairs Minister J C Madhuswamy said, while moving the 'Karnataka Legislature Salaries, Pensions and Allowances and Certain Other Law (Amendment) Ordinance, 2020' to effect the changes. "In the wake of Covid-19, we discussed with leaders of our party and also the opposition that as a gesture, ministers, MLAs and MLCs, heads of authorities, the Speaker and Deputy Speaker should agree to a 30 per cent salary cut," Madhuswamy told the Assembly.

Appreciating the move, Arkalgud JD(S) MLA A T Ramaswamy demanded to know how the government approved hike in salaries of judicial officers during the pandemic when the state was facing a financial crunch. "During this coronavirus period, the state is facing financial problems. It is our duty to rush aid for relief work. However, should this law be applicable to all or only to the Karnataka Legislature?" Ramaswamy asked the Law Minister.

He alleged that judicial officers in Karnataka had on their own, hiked their salaries and then the government gave its nod. "Is this appropriate? Has the government lost its strength? Without seeking your consent, without the approval of the legislature, if they hike their salaries and you give your nod later, are they above law or the Constitution? You need to clarify on this," Ramaswamy said. To this, Madhuswamy said he was not in a position to immediately give an answer as he did not have the facts. He however, assured Ramaswamy that he would gather the information and provide it to him.