Mangalore, Sep 7: Karnataka ranks second for the highest number of farmer suicides in the country with 39,000 suicides since 1995. Overwhelmingly, the suicide-committing farmers are cash crop farmers, said Rural Affairs Editor of The Hindu P Sainath.

Delivering the second oration titled 'Corporate Hijack of Indian Agriculture' in the first B V Kakkilaya Inspired Orations - 2013, P Sainath, recipient of Ramon Magsaysay award, said that this was the result of the huge change that took place in farming, i.e. converting from cultivating food crops to cash crops. As there is greater cultivation of cash crops, there's a greater control by corporates in farming and the costs of cultivation are shooting through the roof as input prices go up. And every damage has been driven by economic policies,” he said, adding that the high farmer suicide rate was a result of growing inequality economic policies.

“The suicide rate is 47 percent higher among farmers than non-farmers. The highest number of suicides is by cotton farmers. Although the official figure states that about 2.85 lakh farmers have committed suicide since 1995, the figure excludes large number of women and Dalit farmers. Thousands of women farmers are excluded while calculating suicide rates, as the society does not consider women as farmers,” he said.

Quoting Ravindranath Tagore, Mr Sainath said that “Food is the source of wealth; food production is a source of endless misery.”

“When the Arab Spring that occurred in countries such as Yemen, Libya, Egypt and Tunisia in 2010, it did not occur due to Twitter. All these countries including India had seen giant increases in food prices since 2008, and all the while food and related companies continued to make profit. Food companies ranked at the top of the Fortune List of most profitable companies in 2009, when the world was hungry. Harvesting crops such as hunger and thirst is what the corporate world and corporate-driven society do,” he said.

He said that the West wanted us to cultivate cash crops to make us more dependent on them, as cash crops commodities are controlled by corporations at the global level. Corporatisation of agriculture is growing worse in India, he said, adding that we have to re-think the entire process of agriculture and move away from extremely critical techniques.

“In growing inequality, what has happened in agriculture is the extreme case of what has been happening in the rest of the country. We need to de-link ourselves from high-input and high-cost economy and lower the cost of agriculture,” he said.

A special 10-day session should be conducted in the Parliament specifically for agriculture, he opined.

The third edition of 'Bara Andre Ellarigoo Ishta', Kannada translation of Sainath's book 'Everybody Loves a Good Drought' was released on the occasion by K Phaniraj. 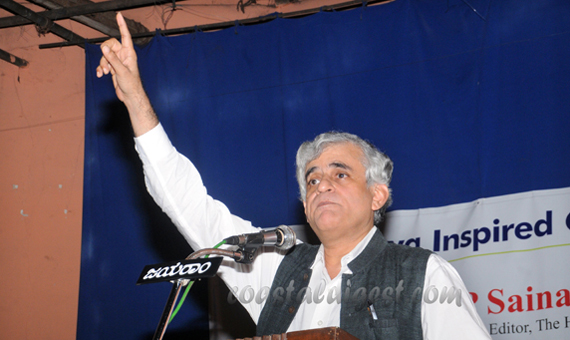 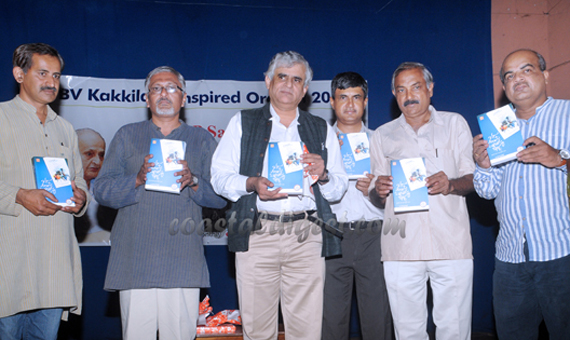 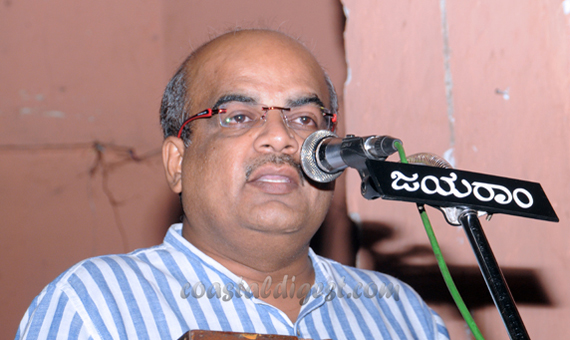 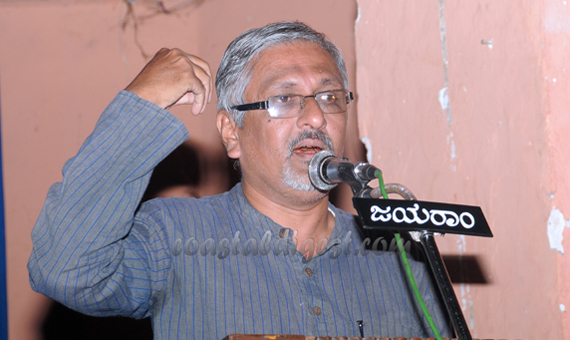 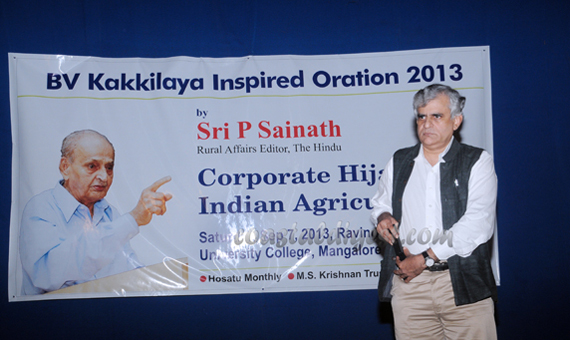 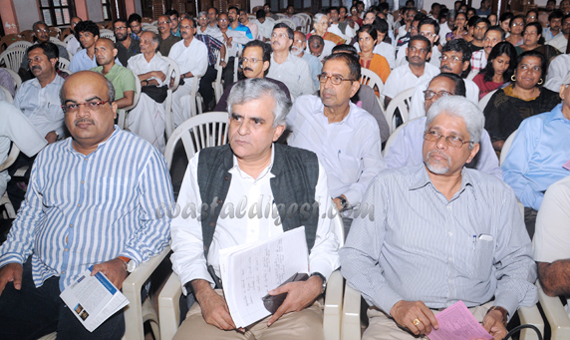 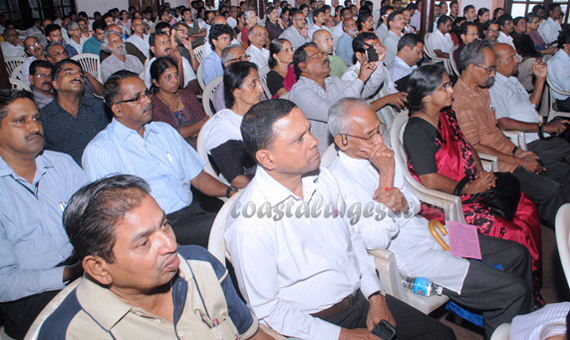 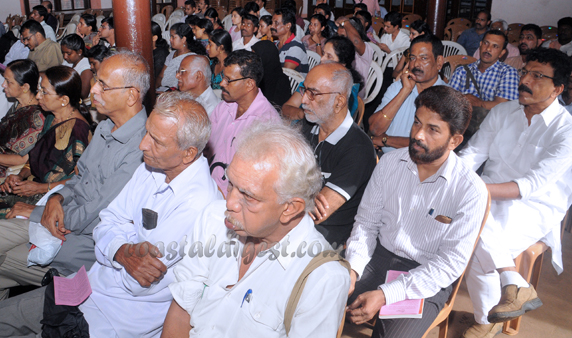 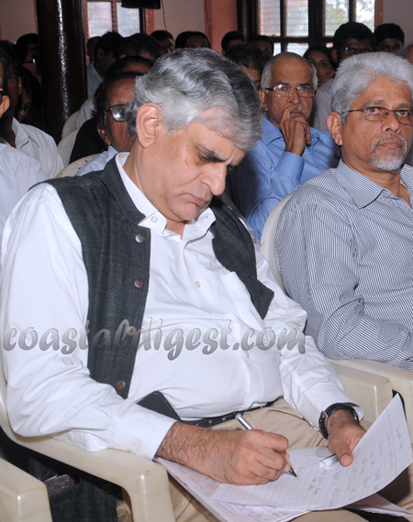 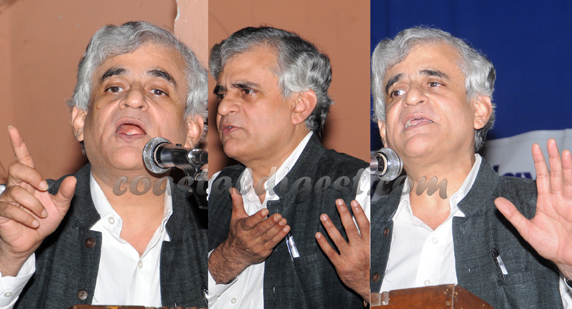 Bengaluru, Sept 22: Opposition Leader Siddaramaiah on Wednesday said the BJP government in the state has indulged in a loot by giving government land to RSS-run Chanakya University at a throwaway price.

Also, there are no provisions under which the government land could be given to a private university, Siddaramaiah said. "Therefore, the land given to Chanakya University is illegal," he said.

The government Tuesday had passed the bill amidst chaos after it was tabled by Higher Education Minister Dr Ashwath Narayan in the assembly to allow Chanakya University to be set up in 116 acres in the Aerospace Park near Devanahalli.

If the government does not act, the party would take legal action to seek withdrawal of land granted for the setting up of Chanakya University.

He also alleged that the Speaker Vishveshwar Heggade Kageri did not allow a debate in the assembly over the matter and the bill was passed hurriedly.

"What is the reason for passing the bill hurriedly. Is the government under RSS pressure," he questioned. It also amounts to favoritism, he added.

Siddaramaiah also flayed the Speaker for taking side of the government when it is required of him to be neutral sitting in a chair sanctified by the Indian Constitution. "His conduct in the assembly yesterday was not impartial," he added.

Kageri had said that there is a need to encourage institutions that promote Indian cultural values in an era where education is highly westernised.

Siddaramaiah alleged that the government is making efforts to impart Manuvadi education to children with an intention of "reestablishing" caste hierarchy as per Manuvad system.

Yesterday, Chief Minister Basavaraj Bommai justified the allocation of land to Chanakya University since similar concessions were given to industries to create jobs.

The government will also give concessions to organisations who give good education to the children by keeping their future in mind, he said.

Managluru, Sept 12: After months of sustained protests by local social activists, the tag 'Adani airports' has been removed from the name boards of the Mangaluru International Airport (MIA).

The original name boards, prior to the Adani group taking over the handling of operations of the airport, have now been restored, social activist Dilraj Alva, who took up the issue with the airport authorities, told reporters here on Saturday.

Alva said the Adani group had changed the name, adding 'Adani airports' to the name boards after it took over the handling operations.

However, as per the agreement for operations and maintenance of the airport, there was no provision to change the airport name, which was revealed through an RTI reply. A legal notice was served in March this year to the Airports Authority of India (AAI) and the MIA director questioning the 'Adani' tag attached to the name boards.

The legal battle waged in this regard has now yielded result and the original name board has been restored from Friday. The changes have been made in MIA's official Facebook and twitter accounts also, Alva said.

Great Mr. Khader. what about your opinion in Re-building demolished Babri Masjid... will u call the press reporters to announce your concern on Babri Mosque which also demolished by BJP-RSS.