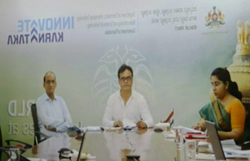 Bengaluru, Jun 3: Deputy Chief Minister CN Ashwath Narayan on Tuesday invited investors in the Electronics System and Design Manufacturing (ESDM) sector to Karnataka, as the state contributes 64 per cent to the sector's total exports from the nation.

During a video conference organised by Invest India for a few select states with leading ESDM players across the globe, Narayan said, "We are the largest chip design hub and home to 70 per cent of India's chip designers."

Karnataka has introduced industry-friendly policies from the beginning and it continues to be the leader in attracting technology-specific investments, he added.

"Karnataka has an estimated GSDP of almost USD 220 billion. We were the first to come out with IT, BT, ESDM, and AVGC (Animation, Visual Effects, Gaming, and Comics) policies to give a push to the growth of the technology sectors and innovation. We also have vibrant automobiles, agro, aerospace, textile and garment, and heavy engineering industries," Narayan explained.

"We have created sector-specific SEZs for key industries such as IT, biotechnology and engineering, food processing and aerospace,'' he said.

However, the state government is planning ahead as it has initiated talks with other countries.

"We have held multiple consultations with the private sector to seek inputs for returning to business as we ease the COVID-19 lockdown restrictions. We are also initiating dialogue with countries across the globe to understand future plans for their companies in the post COVID era and discuss how the Karnataka government can support that," the Deputy Chief Minister stated.

"Karnataka has attracted cumulative FDI inflows in the state from 2000 to 2019 which were recorded at USD 42.3 billion," he said.

Referring to the Karnataka ESDM policy 2017-2022, Narayan further said, "We aim to stimulate the growth of 2,000 ESDM start-ups during the policy period and create 20 lakh new jobs by 2025.